skip to main | skip to sidebar

Why I too time off on Friday (The day AFTER Thanksgiving) 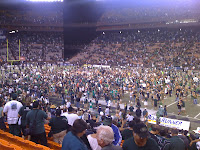 If you read the kahaleolamassage.com website, you knew that I would be taking off on Friday from 12pm on. Which I did... And here's why:

Thanks to Cybil, I was able to witness a little history for the University of Hawaii football team! Unless you've been under a rock for the past 3 months, the Warriors have been able to remain undefeated (12-0) and in the hunt for a BCS game. And needless to say, this game against Boise State would be the biggest because a.) Hawaii hasn't beaten Boise St. in the June Jones era, b.) Hawaii hasn't won the WAC outright in at least 10 years, and c.) Many believed that UH's unblemished record was a fluke and a product of a weak schedule (true, but you still have to win games- ask the Michigans of the football world).

So after much trepidation, a little bit of nail biting, and some liquid refreshment to soothe the nerves, UH was able to pull through and win comfortably. While we were up in the yellow section for most of the night, we were able to make it down to the orange section to soak up the fun, as seen in the pictures.

While I am a proud Oregon State alum, I was able to appreciate this win for UH, the fans (like Cybil), and pretty much the state of Hawaii. Hawaii athletics rarely gets the respect it deserves, so with this win it showed the national viewing audience that while they haven't played top competition, THEY STEP UP WHEN IT COUNTS!!!!

Reality is, UH needs to win one more game, this week's matchup against UW to truly stake its claim to a BCS game berth. A 13-0 season would be one for the ages, so I believe that there will be no let down this week. It should be a good one...

Ka Hale Ola Massage Therapy
Aloha! Thanks for stopping by. This is Aran. I just wanted to start up a blog in the event I had something fun and exciting to say... We've recently added a podcast for your listening enjoyment as well!